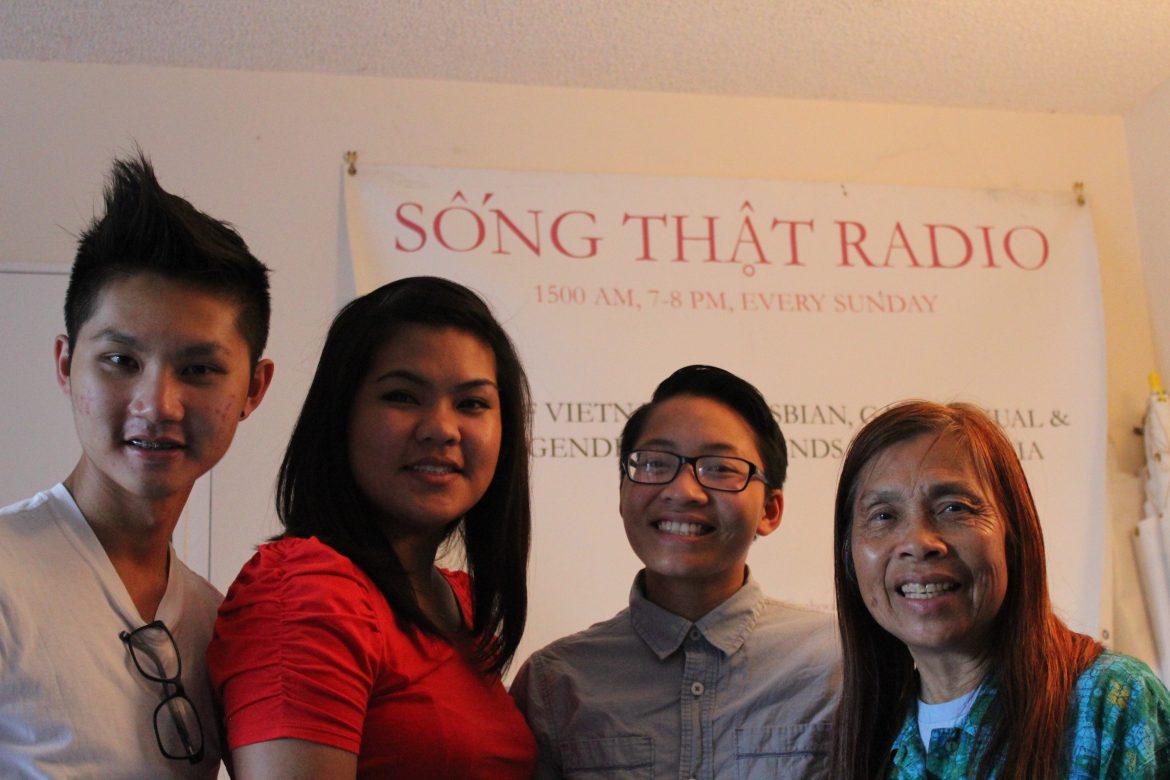 Song That and API Equality – NorCal 2012

“Song That” – To Live Truthfully

I ran into my aunt’s room and turned the old school boombox dial to 1500AM. I heard our voices reciting the Vietnamese script that we practiced for weeks and weeks. We did it! We’re on the radio!, I thought. Immediately, I turned the volume dial lower. My father was in another room on the other side of the house and my mother was on her way home from work. I was extremely conflicted: while I was excited to be on the radio with the API Equality interns, I felt sad that I couldn’t share this moment with my own parents. Instead, I texted all my friends and posted facebook statuses that pleaded my parents not to hear the radio segment.

But for all the things I didn’t want… I secretly wished happened. I fought between my deep desire to come out to my parents and my overwhelming fear of disappointing them. It was like a super adhesive bandage that was stuck to an open, festering wound – I know I should rip it off, but it wouldn’t hurt to just leave it on a little longer.

My friends were asking, “Is your mom listening to this right now?” I thought:
“I hope not.”
“But I hope so.”

After the 30 minute radio segment ended, I walked back to my empty living room. So that was that: my double life captured in a moment that found me sneaking into a corner of a room listening a radio show I was featured on while my mom and dad had no idea.

Nevertheless, the content of that radio segment still exists.

… and if there were ever a moment that I’d be ready to come out, I can still play the recording to them. It was an incredibly empowering experience for me to be able to communicate in Vietnamese what it means to hide a part of my life from my family.

“They worked so hard to get me where I am. They escaped from Vietnam. Hopped around many jobs. Sacrificed a lot for me to have my privileges. I feel like I will hurt them if I tell them I am queer because that is a negative aspect in their eyes.”

It moves me knowing that many Vietnamese folks in San Jose heard our stories that night. Of coming out. Of fear. Of disappointment. Of conflicting cultures. Of having so much love for our families that it hurts us and keeps us hidden behind secrets and lies. Struggling through broken Vietnamese tongues, we dared to voice ourselves in the face of misunderstandings and intolerance with a vision of changing the hearts and minds in our own backyard. “Song That” means being able to live your life honestly, and breaking through language barriers is a step towards the truth. I hope that it a least moved a Vietnamese mother or father to be more accepting of their queer child or family member(s).

The interns and I practiced the Vietnamese script for three weeks. It was Sarah and Hai Chi’s first time reading Vietnamese text so they had to learn how to speak in Vietnamese with the different accents, the different tones, and the foreign vocabulary. For Sarah, it was incredibly uncomfortable for them to express themselves in a language they could hardly understand. For Hai Chi, he had to learn how to adapt his Southern accent to one that was more familiar to him, growing up in a Chinese- Vietnamese household. As for myself, I learned a lot through helping the interns practice. I learned that the Vietnamese language is so very expressive. Even though it may lack queer terminology, there are still so many ways to convey our experiences and struggles.

“Song That Radio is the first and only radio program for the VLGBT community. Our weekly program consists of community news, major concerns of the VLGBT, questions and answers on personal matters, special interviews, film reviews, poetry and prose by the VLGBT, music, etc.” Guests speakers also include doctors, parents, allies, and Vietnamese celebrities. Today, they continue to focus on debunking the stigmas and myths that circulate within the Vietnamese American community.

Song That Radio has been around for over 13 years and they have been recognized and acknowledged for their inspiration and creativity with 6 distinguished community awards. Chi Vuong, who is over 70 years old records through her makeshift studio (a living room cluttered with piles of paperwork, posters, drag costume, and plaques), on her old Windows 98 brick of a computer. She usually tries to edit on her own recordings, but often requires additional help. Thank you Song That Radio for inviting us to participate in the first ever youth segment on Coming Out as Vietnamese Americans Students.