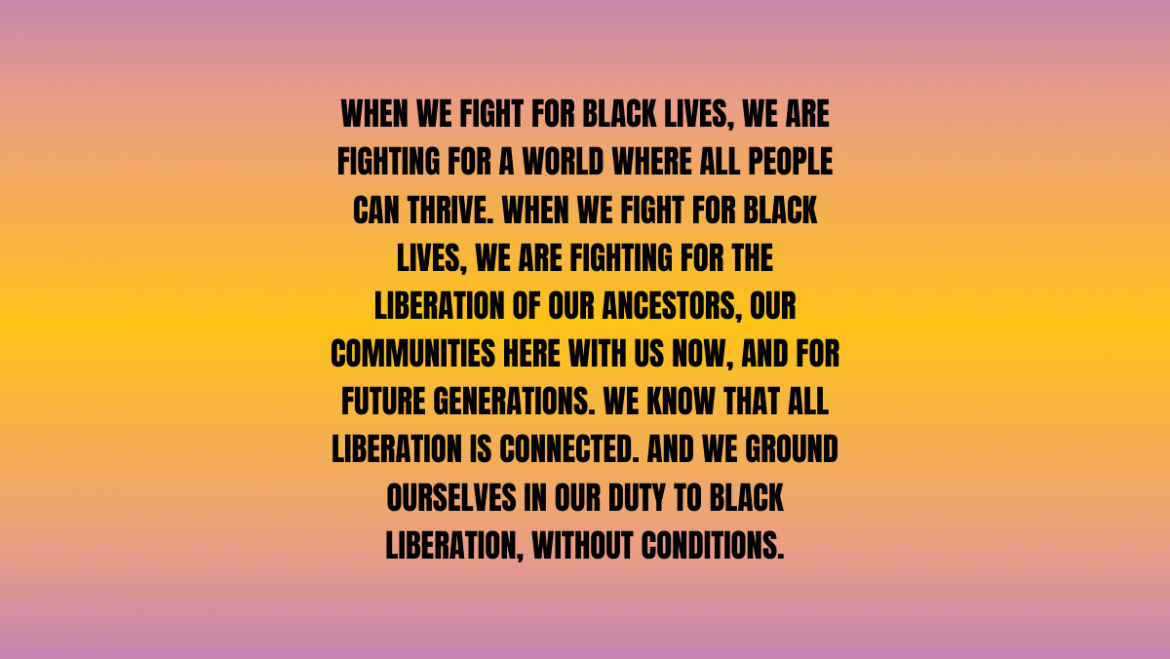 We are non-Black people of Asian and Pasifika (A&PI) descent, and we are trans, nonbinary, and many Indigenous cultural gender identities¹. We span many movements, many generations, and many organizations.

We affirm the value of Black lives, unconditionally. We are in defense of Black life. We fight for and alongside Black people, Black uprisings, and Black futures. We support Black communities’ right to fight, mourn, and protest how they decide. We follow Black leadership.

For our Black A&PI family, we acknowledge the pain of watching non-Black A&PI people not unanimously support Black uprisings. And we commit to the work that will shift that tide. This includes, and is not limited to, having one-on-one conversations with our people, holding educational events and discussions, providing direct material support, showing up in-person, and channeling our organizations to build mass movements, and—for those who are able—putting our bodies on the line when necessary.

Why do we fight for Black lives? This question should not even have to be asked. It is core to our human responsibility. But let us be explicit. We fight because these are our families, neighbors, beloveds, and comrades. Because Black people have endured violence at the hands of the United States and other colonial powers for far too long. For centuries and to this day, anti-Blackness is a global issue. We demand the safety and dignity of Black people. Black lives deserve to be defended unconditionally.

In addition to our collective human responsibility, we also know all of our liberation movements are deeply indebted to the legacies, labor, and sacrifices of Black liberation movements. Black bodies and minds have literally created and labored at the frontlines of defining and fighting white supremacy and violence. Unfortunately, many non-Black A&PI people have been committed to upholding white supremacy. We want this to change.

We acknowledge that the U.S. government attacking Black people also killed millions of people in wars across Iraq, Afghanistan, Vietnam, Cambodia, Laos, Korea, and the Philippines. In those same wars, the U.S. targeted poor Black neighborhoods for recruitment, considering their lives disposable in their imperialist campaigns.

The government that is destroying Black neighborhoods also bombed the Marshall Islands and stole the lands of Indigenous people in Hawai’i, Sāmoa, Guåhan, and the northern Mariana Islands—as a continuation of their colonization of Native nations on Turtle Island, known to some as North America. This government continues to erase the historic and cultural wealth of these Indigenous people, and further hinders their ability to care for future generations.

The government surveilling Black communities did the same to Muslim and Sikh communities (including, of course, Black Muslims and Sikhs), profiling them as threats to national security as a justification for mass violence.

The government denying the very humanity of Black people is the same one that has denied the humanity of trans and non-binary people in countless ways. Alongside the government, white supremacists and right-wing forces attacking Black neighborhoods are the same forces that have attacked A&PI communities and trans and nonbinary people for decades. We also know that when we cite statistics about violence against trans people, we are disproportionately talking about the violence against Black trans people. To end violence against trans people inherently means ending anti-Black violence.

As non-Black trans A&PI people, we extend gratitude to Black trans people who helped launch the LGBTQ movement and various racial justice movements, winning the rights we have today. They continue to lead us toward vital dreams of liberation. Black trans people remain targets of violence and hate, and not just from the police. Yet, Black trans people have remained resilient in the face of compounding oppressions, and have created countless ways to keep themselves and their communities alive. For this reason, and for many others, Black trans people have always been and still are the leaders we need to create a new world.

We urge A&PI activists and organizations—along with our comrades—to not just defend Black life but to invest in and uplift Black trans leadership. Today.

You can sign onto this letter to show your support by filling out this form.

(titles listed for identification purposes only)

¹ We acknowledge the gatekeeping of the word “trans,” which has led many nonbinary and Indigenous people to be harmed and disenfranchised. We affirm that all gender variant people must be given due respect to identify as it feels right to them, and that they should be included in the trans umbrella if they wish to be.