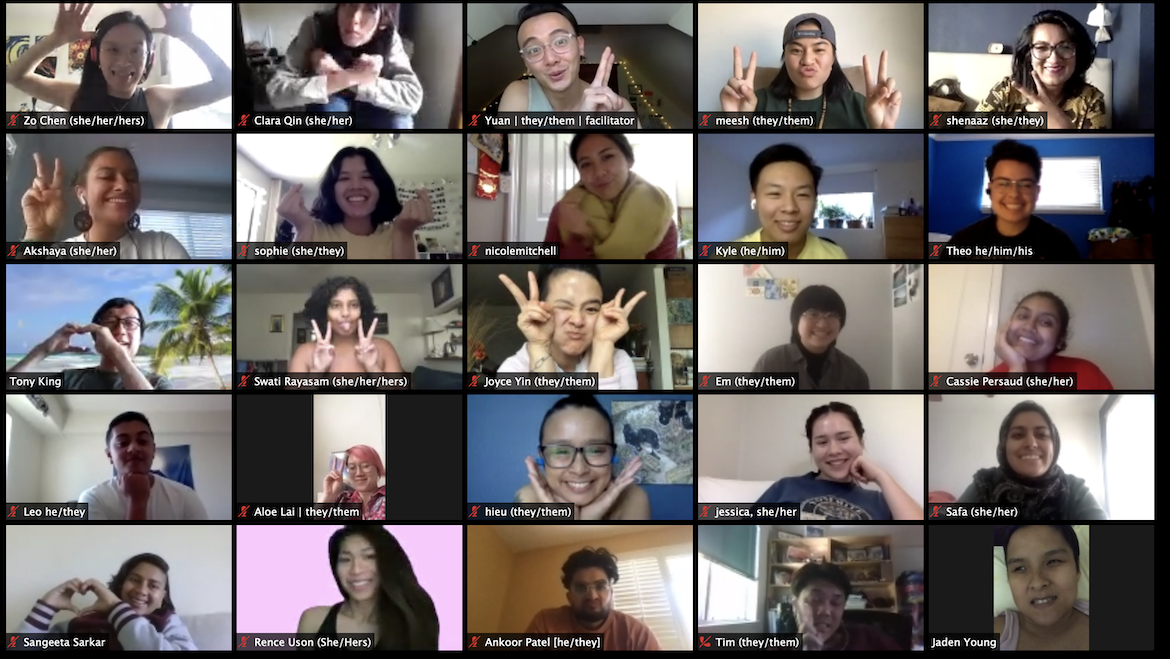 Image description: Zoom screenshot of 25 smiling faces. Some are holding up peace signs and heart signs.
by Sophie Pham | August 16, 2020

Vulnerability is Power: Reflections from LEX 2020

As we organize mutual aid networks, workshop series, and community-based research projects, we know how important it is to reflect on our experiences. Over the course of the next few weeks we’ll be launching a four-part series entitled, “Organizing in the time of COVID-19: A Reflection Series from APIENC”. Stay tuned for more!

There I was, on a zoom call with over 30 people who I had just met the weekend before, having a vulnerable one-on-one conversation with Sammie for everyone to watch.

This was during the third session of APIENC’s annual Leadership Exchange, or LEX for short. Usually, LEX is an in-person, 2 weekend-long training for trans and queer API organizers, but this was no usual year. Since meeting in person wasn’t an option, APIENC held LEX over 6 weekends, over zoom. I had just started as one of APIENC’s Summer Organizers when I signed up for LEX, not knowing what to expect.

When I hopped onto zoom for the first LEX weekend, I saw there were 36 participants and facilitators with me—I was surprised, excited, and nervous! It was a change from the comfort I had cultivated just the week before, as I met 7 other folks for the start of the Summer Organizer Program. I continued to spend the first LEX weekend nervous and excited, but as time went on, more nervousness, worries, and insecurities washed over me. What if I said the wrong thing? What if I took up too much space? Lots of questions formed in my head—usual questions that come up when I’m organizing in spaces with many people that I have never met before.

On the third session of LEX, we were learning about relationship-building in movement work. During lunch, Sammie asked if I wanted to model a 1-on-1 with them in front of everyone for 10 minutes. I said yes, so nervous and still excited to be included.

Just the weekend before, I felt shame around speaking in a small breakout room, when I didn’t fully know the answer, and had limited time to be together. I ended up struggling, not really answering the question, but taking up limited time that we had. I regretted speaking up in that moment. Now I recognize, I was so worried about being “perfect,” even when having the “perfect” answer was not necessary, especially in spaces like APIENC, where folks emphasize moving away from perfectionism, because it is a white supremacist tool.

I held this thought as I went on to my live 1-on-1 with Sammie, still feeling nervous, wondering if I wouldn’t know what to say, how to answer their questions, or if I would take up the time in the workshop. Although I had learned about how we are trying to stray away from perfectionism and embrace the process of making mistakes, I hadn’t truly unlearned the ways I had internalized shame around being imperfect. When Sammie and I started talking, I instantly felt more comfortable and our conversation flowed really easily. I was able to center in on their video, so it felt like I was talking only to them, and I tried to practice vulnerability throughout the conversation. I explained that I felt a little overwhelmed and insecure about the first two LEX sessions. I openly talked about how I often feel inadequate in organizing spaces, and that I had anxieties around having to explain things coherently. Sammie held the information that I offered, and I felt deeply listened to and heard. It felt both relieving and comforting to be able to name my feelings, not just to Sammie but in front of other people in a space where there is a lot of care and love.

When our conversation ended, I was pleasantly surprised by how I felt more comfortable that I had expected. I didn’t expect that my vulnerability would also welcome others to message in the Zoom chat that they resonated with the things I was saying. As Sammie and I ended the conversation, I was greeted by so many affirmations, I felt supported because my feelings and experiences were affirmed. Being honest and vulnerable about my feelings allowed me to also bring more of my full self into APIENC and LEX, knowing that folks at APIENC and LEX were there to welcome me and others fully.

I’m learning a lot this summer, like that it is okay to be vulnerable, and it is okay to make mistakes. In previous spaces I knew this, but in APIENC and during LEX I felt that being vulnerable and being imperfect are deeply welcome, and in fact, we are strongly challenged to do both. I can feel myself unlearning—unlearning the shame that comes with being imperfect or making mistakes, especially when those mistakes might affect other people. I am also learning more about holding myself accountable in this process.

During my live 1-on-1, taking up space felt good, and I felt honored and seen to be invited by Sammie to take up space in that session of LEX. When I was first interviewing for APIENC, I said that I wanted to work on relationship building. APIENC held and recognized the ways I wanted to grow, and through the live 1-on-1 encouraged me to do so.

Participating in LEX and being at APIENC has taught me that vulnerability is power. The ability to speak about how you’re honestly feeling, the ability to embrace being imperfect, the ability to ask for affirmations or ask for help or name your boundaries is powerful. So many of us were vulnerable during LEX, when many of us did not know each other, and that offering of another way to be was beyond powerful to witness. Vulnerability is not always easy, and still it is necessary to be with one another, building power and stronger communities for the long haul.

Sophie Pham (she/they) is a queer, second generation Vietnamese-American born in the San Gabriel Valley in Southern California. Sophie’s passion and growth for organizing has come out of student/campus organizing, where she sees the collective power that students have and is always grateful for the people she has met in organizing spaces. She is excited to learn from APIENC & meet the broader community. Sophie also enjoys being in the warm company of friends, cooking and trying new recipes, and experimenting with film photography and other art!