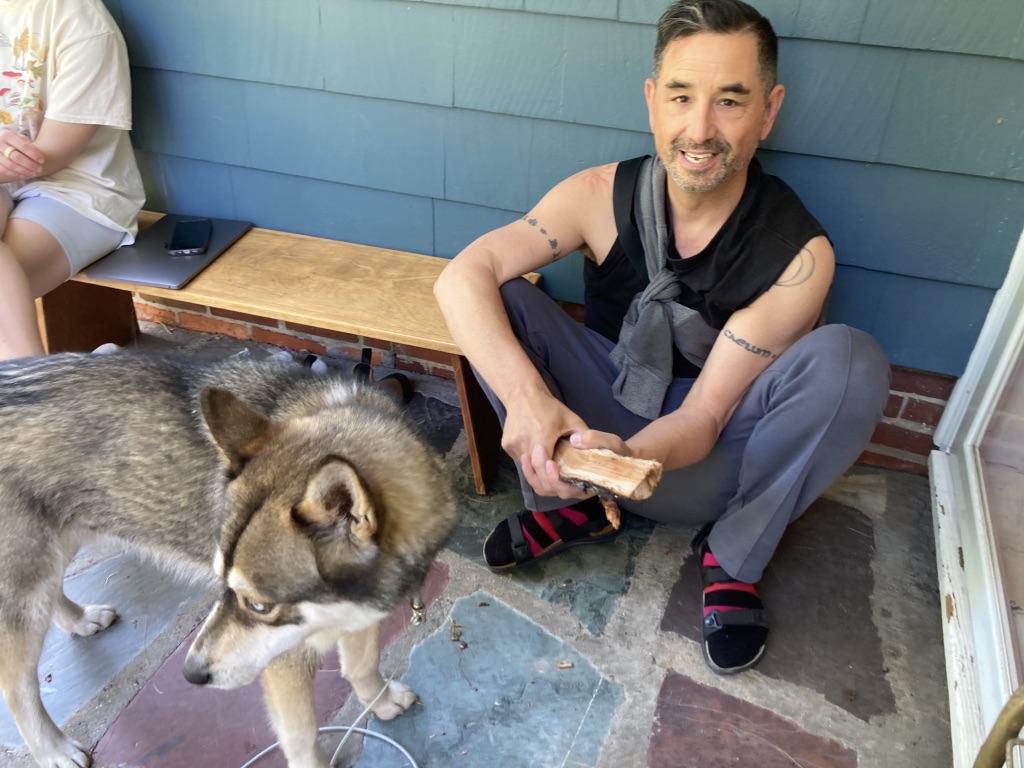 What LavNix Does Was Impossible

On the eve of my 18th birthday, in the starting-to-become-summer month of May of 1980, I got to sleep in the arms of my boyfriend Danny. Having spent an overnight with him, in a friends spare bedroom, making love (before AIDS), away from the prying eyes of our families and the ‘fag bashing’ we feared, we enjoyed the one and only night we could be together in the months we’d dated.

Everything about that single night was a dream come true, but about as feasible as winning the lottery: back then there were no marriages, or TV stars, or teen heartthrobs; there were no laws or lawyers or lawsuits, bars were out of the question, queer non-profits didn’t exist, and there were no chat rooms or apps, or…anything.

Finding another queer teen boy to love was next to impossible, much less to spend a night with. At that tender age, having barely admitted to myself that I was gay, I was nailed into a closet not daring to tell my family. Why would you want to be thrown out of the house like my high school boyfriend Buddy?

I met Danny at a “gay youth” group, in 1979, in a teeny room on the campus of MIT. We, about a dozen of us, would weekly sneak into a massive campus building, to meet under the auspices of the “Committee For Gay Youth” (‘gay’ being the all encompassing word for ‘everyone’). I never met “the committee” (of adults) but I sure met a wonderful group of about a dozen rag-tag queer kids of all shapes and sizes.

Finding an LGBTQI youth group was miraculous, and it was something I held onto desperately, as I was closeted every other minute of my life. I’d also known that in the outdoor sex area in Boston, “The Fens,” a man had been murdered while searching for anonymous sex, and that the local queer newspaper offices of “Gay Community News” had been firebombed.

This is where my queer life started, in the Stone Ages.

Growing up biracial in Massachusetts, in the 1970’s, I was unaware of my own multiracial identity, given that I was surrounded by nothing but white folk. As I grew into questioning and dissecting, starting when I was 28, how I’d been brainwashed, I began my journey from Boston to San Francisco, in 1994, where I wasn’t a “freak,” as a queer, multi-‘racial,’ bi-cultural LGBTQI/HIV/AIDS activist.

Decades later, my first encounter with LavNix was through the Dragon Fruit Project, an intergenerational QTAPI oral history project. The Project volunteers asked me to share stories with my former Executive Director Steve Lew and former co-worker Prescott Chow about our API-specific HIV/AIDS work in the early 1990s at the Gay Asian Pacific Alliance Community HIV Project (our staff was all of 14 of us!) In the early 1990s we were one of a handful of HIV/AIDS agencies providing culturally competent HIV prevention and education.

It was humbling and an honor to tell the stories of what we were doing, much less to have our work thought of as something worth keeping a record of and be seen as an “elder.” These interviews helped me claim that part of my identity!

Wow, who were these folk reaching out to us and probing into an understanding of how we ‘elders’ did what we did? So that they could duplicate the positive aspects and learn from our mistakes?! Exceptional! This wasn’t even a thought back in my baby queer days. I mean there we’re old people but … why would you even talk to them?

It was a while later that the former Executive Director of APIENC/LavNix, Sammie and I, spoke about what I thought they might be aware of, in terms of inclusion, when starting intergenerational dialogues. Sammie and I discussed who, what, and how they might tackle and where to start. I encouraged them to start a small pilot and not to be afraid of making mistakes.

Finally, I joined Steve Lew and Stephen Shum to work on developing the Asking For Help workshops that were designed to bring together community members helping them to make powerful, assertive asks of support from their loved ones. It had been identified that our acculturation towards not imposing might be causing harm: how could folx receive help, especially for me as an ‘older’ person, if I didn’t know how to ask?!

All of these shifts, starting in 1994 have been so instrumental in growing into my own self-esteemed skin. Let’s be real, I was called “Chink!” in Junior High School in 1974, felt like an utter weirdo in Boston, but discovered in moving to the Bay Area that not only was I part of a giant community of QTAPI folk but that I could belong and have the history of being in this community be considered an accomplishment.

I’m growing (finally) into asking for help, being vulnerable, and voicing my access needs. Just showing up, now that I’ve joined the LavNix Fundraising Team. I look forward to our meetings because of all of the support, care, and positive vibes.

Before I ask for your support I want to tell you about the practice of “Generous Giving.” I offer in my avocation as a mindfulness teacher at a disabled Buddhist Oakland group. Imagine the feeling you have from offering a friend some support, a simple gift, a bottle of water, or a smile – what does it feel like to be generous?

Even if what we can give seems small, the act of giving what is in our means is important because it enlarges our capacity for the joy in giving, it nurtures our heart and spirit. Generous Giving says that you feel the joy of giving and you get to harvest that feeling in yourself, and keep it.

Cultivating this feeling is what I recommend. Letting go of the baggage of what you ‘should’ give and practice giving from a place of joy.

To see that the amazing community-building work of Lavender Phoenix continues, I am asking you to support and nourish our community. We’re raising $15,000 this fall to tend to ourselves, each other, and our organization at LavNix.

Will you donate $90 to help us lean into the abundance of such marvelous ground breaking work that helps create such an awesome community?

Here are some other # amounts that nourish us – that you might nourish with a donation!

I am so grateful for your support, for you, and for our community. In the few years (joking) that I’ve been on this planet I’ve seen us grow from utterly marginalized to a vibrant community of loving, caring, involved folx who are making a difference.

I appreciate you and I want you to know that I value you! You are us! You are our future! Keep being wonderful you.

Blessings, love, and thanks,

Kenji Oshima [he/they] is an irreverent, bi-racial/bi-cultural, creative, gimpy, spiritual geek who earns a living as a coach, dharma teacher, and spiritual director. With a history as an activist and artist, he’s loving the kick-ass LavNix community and thrilled to be part of the movement for change and good.