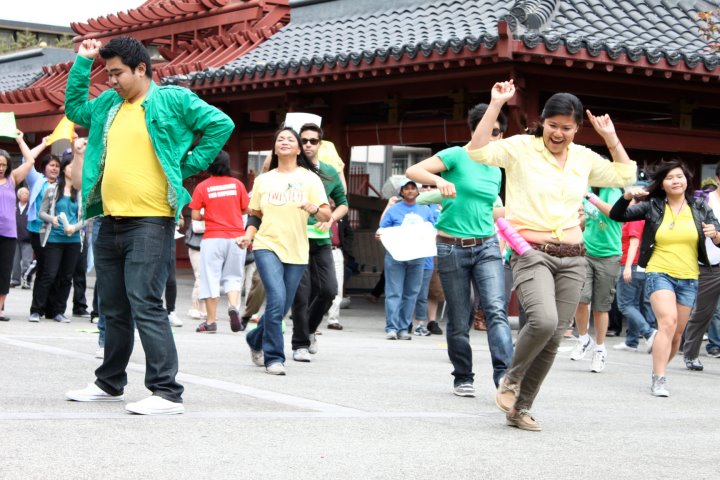 Even with a competing marching band and no longer being able to hear the music for the last minute of the routine, these dance-activists were determined to stay on beat and share the message of love and acceptance.

Thank you to all the amazing and inspiring folks who had the courage to dance for what they believe in!

San Francisco — Today, just short of 100 Lesbian, Gay, Bisexual, Transgender and Queer (LGBTQ) Asian Pacific Islanders (API) and their allies staged a flash mob in the heart of Chinatown. A flash mob is a collective action undertaken by a group of people who assemble in public venues for a brief time and then disperse. Oftentimes, it starts with a few individuals and quickly, seemingly random, incorporates all participants, and then just as quickly wraps up. It can be anything from singing to dancing to simply standing still.

The motley-colored group, adorned in all colors of the rainbow, took over the grounds of Portsmouth Square, the local stomping grounds for San Francisco’s Chinatown residents, and regaled the locals in the square with a lively dance routine peppered with various signs and posters in Chinese, English, and other API languages. Their message was one of love and acceptance.

“Today was about coming home.” said Tawal Panyacosit Jr, Director of API Equality — Northern California. “Many of us grew up in this community. I remember spending my summers in the area with Cameron House. But, since growing up and coming out as Gay or Lesbian or Transgender, many of us don’t feel welcome anymore. The silence and invisibility around this issue is heartbreaking for many of us. Today, through the universal language of song and dance, we wanted to come home as both Gay and Asian.”

While there are over 66,000 APIs who identify as Gay, Lesbian, Bisexual, or Transgender in the State of California, according to the Williams Institute, API Equality — Northern California’s polling still shows that the majority of the API community is unaware of this population with APIs demonstrating relatively the lowest levels of familiarity with LGBTQ people, particularly close relations like friends or family.

“Is being Asian about our shared values and culture or is about one’s sexual orientation? I am my mother’s daughter. I believe in respecting my elders, in prioritizing family, and in giving back to society? Just because I am Gay, does that mean I’m not Asian? Why can’t we be both?” expressed Vanessa Coe, Lead Organizer for API Equality — Northern California.