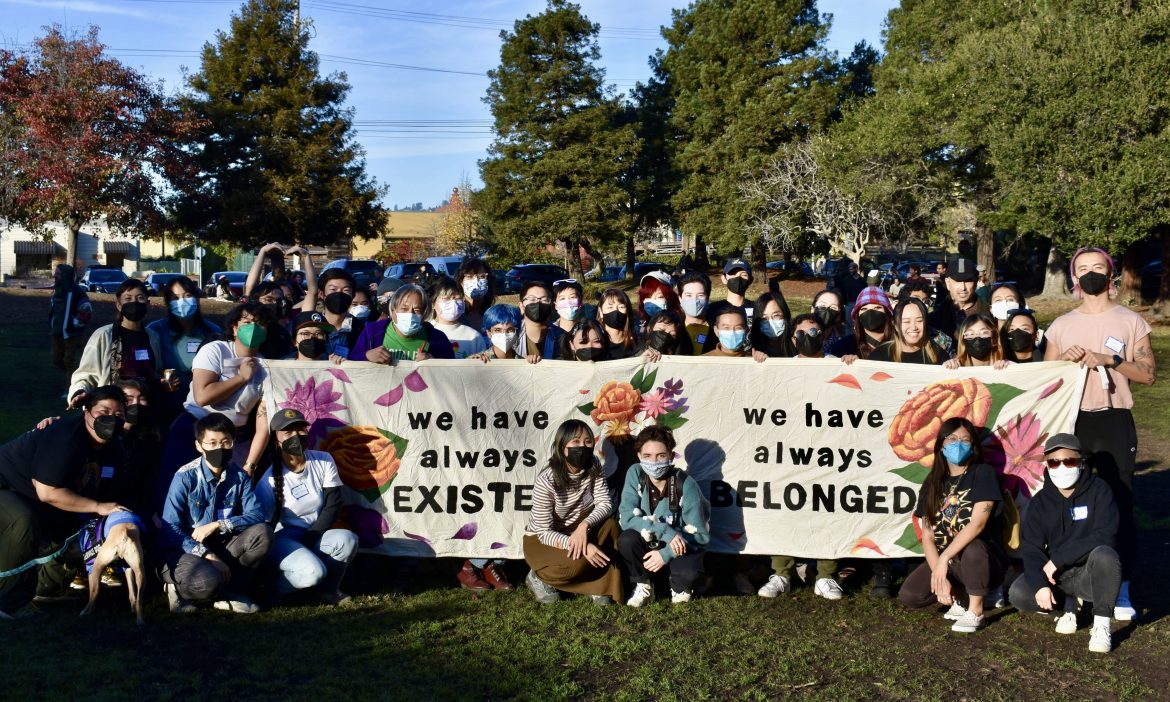 A crowd of 40 trans and queer APIs gather around a banner that reads “We have always EXISTED, we have always BELONGED.”

What does hope make possible?

“To hope is dangerous, and yet it is the opposite of fear, for to live is to risk.”

– Rebeca Solnit, Hope in the Dark

My heart split open when I first learned about Jaxon. Jaxon, a young gay Korean adoptee, was found dead in suspicious circumstances in the home of a stranger. When his parents, Jim and Angie, pressed the SF Sheriff’s Department and Medical Examiner to learn how he died, they were told no further investigation was needed because the “[queer] community parties, and it often results in overdoses.” His parents fought for more than two years to learn more, and were dismissed and silenced at every turn by the systems they struggled against.

While Jaxon’s family fought for the truth they needed to heal, conservative forces took advantage of attacks on trans, queer, and API communities to advance violent solutions. We know police harass and criminalize us while having no impact on the real violence we face. Yet, in a bid to strengthen police power in San Francisco, Mayor Breed attempted to boycott the Pride Parade in solidarity with cops barred from marching in-uniform. Politicians across the Bay and the country have denounced anti-Asian attacks publically, while quietly ripping Southeast Asian refugees from their homes and deporting them. This year, Lavender Phoenix’s community faced relentless reasons to despair.

Yet, rather than give in, LavNix responded with hope: our living commitment to channel our grief into visionary solutions. Our Community Safety Committee organized a vigil with Jaxon’s family to demand accountability. Our Healing Justice Committee trained trans API peer counselors to provide free mental health support to our most isolated community members. We led workshops on community defense; organized trainings by-and-for trans APIs and queer Hmong youth to heal by making art; responded to global attacks on trans bodily autonomy by educating organizers across movements on trans justice; mentored a new generation of young trans and queer API organizers through the 13th year of our Summer Organizer Program; chose a new name to honor our histories; and so much more.

As powerful institutions use our safety as a bargaining chip to secure police power, it’s clear we must lead campaigns to divest from them, build our community’s connections, and invest in the real solutions that nourish us. In the next year, Lavender Phoenix will:

Train organizers across movements to ask for help and lead sustainably, and more!

After Jaxon died, the pandemic shut down Jim and Angie’s plans for a funeral. While they fought hard to learn how Jaxon passed away, they never had a chance to fully celebrate his life. But this March, on the 3rd anniversary of his death, LavNix helped gather more than 100 of his family, friends, classmates, and queer community at City Hall to remember him. We laid pictures of him at an altar, and showered him with flowers. His mom, aunt and cousin shared memories of him that made us smile. Our comrades at Asian Refugees United led us in a prayer for him—a goodbye to our young ancestor.

That day, Jim and Angie shared how much it meant, after years of struggle, to realize that they weren’t alone in their grief. To learn for the first time that they had a community to support them in their struggle, every single day. This is the heart of our work at Lavender Phoenix: through the endless waves of pessimism that threaten to engulf us, we give each other an anchor. Our members have anchored me day-after-day this year through their courage, their care, and their commitment to winning a life-giving future. I’m excited for a new year to struggle and care for one another, until all of our people can thrive.

With love and in solidarity,